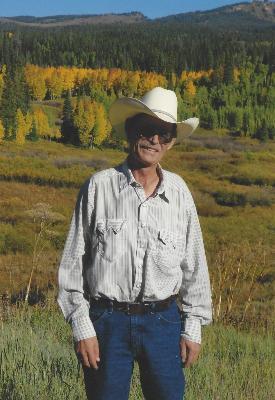 Bill was the youngest of four children, he was born to Karl and Clara Read in raton, New Mexico. He was preceded in death by his father, Karl in April 1977, his mother Clara in February 2004, his brother Tom in July 1983 and his sister-in-law Judy in March 1980.

Bill was diagnosed with bone cancer in July and in spite of the best efforts of medical personnel and Bill's courageous battle, he succumbed to the disease early on the morning of March 23, with his sister Charlotte and nephews John cunningham and Wayne Read at his side.

In 1972, bill graduated from West Grand High School. He is well remembered as an outstanding football player having made the all-conference teams four times and leading the 1971 Mustangs to the quarter finals. He later attended West Texas State A&M in Canyon Texas for two years before returning to the family ranch following the death of his father.

Bill was a man of few words and a strong faith which never wavered during the final difficult months. He most wanted to be remembered as an honest man who loved to work and referred to himself as a jack-of-all-trades. he did, in fact, tackle many different things during his adult life. He ran heavy equipment, drove logging trucks, plowed snow, groomed ski runs, worked construction and built fences. Above all, he loved to be on one of his favorite horses working cattle and always with one of two well trained dogs at his side.

Bill was a fiercely independent man. However, he graciously accepted the help he knew that was necessary and often commented how much he appreciated the professional and loving care he received at Kremmling Memorial Hospital and the Presbyterian/St. Lukes. He was also so thankful for the expertise and tireless efforts of friend Helen Keim and niece Stephanie Ahlberg in negotiating the red tape and mounds of paper work. He also appreciated Joe Shields, Judith and rich Broyles and mark Harvat for their continued support and help with his care.

There are no immediate plans for a memorial service but the family expects to have something in the summer.

To order memorial trees or send flowers to the family in memory of William "Bill" Read, please visit our flower store.