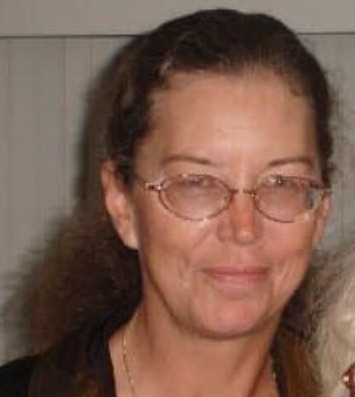 Stephanie Zoo Benedict, age 65, passed away at St. Francis Medical Center in Colorado Springs on Thursday, May 20th. She failed to recover from surgery related to colon cancer. She was a mother, grandmother, sister, aunt, and great-aunt. She was a gifted gemcutter, lapadarist and artist. She was a Christian.

Stephanie never married, but is survived by her children, Francesca Williams and Giovanni Norman; granddaughters, Rebekah, Rachel and Renée Williams; sisters, Barbara Benedict and Marianna Bacilla; nephew, Daniel Norman; and nieces, Erica Benedict-Barta Walla and Alexandra Daley; and grandnephew, Gavin Daley. To the very end, Stephanie was very close to John Dominic Salandre, Francesca’s birth father.
Born October 2, 1955 in Santa Fe, New Mexico to Russell Reed Benedict and Meilutė Zilis (a.k.a. Julie Meilutė Benedict), Stephanie had five sisters: Tevina, Nikki, Francesca, Barbara and Marianna.
When she was three years old, her mother recognized that Stephanie danced to the beat of a different drum. Stephanie was brilliant but also had social deficits due to Asperger’s Syndrome. In those days, special education services were non-existent for “twice exceptional” children. Due to extreme social anxiety, Stephanie never made it past the first day of high school.
Stephanie had fond memories of helping her father with his uranium claims and mines near Grants, New Mexico. Stephanie’s youth was marked by multiple childhood traumas. Her baby sister Francesca, died because the hospital refused to treat her, due to her family’s inability to pay. Later, their home burned down, devastating everyone. When Stephanie’s older sister Nikki was murdered by an unknown assailant, neither Stephanie nor her family received grief counseling. She never fully recovered, developing schizoaffective disorder in her teen years. Stephanie had two children but lost parental rights to them. Both were adopted out of foster care by Stephanie’s sister, Marianna.
Stephanie was a gifted gemcutter, lapadarist and artist. As a girl, she won a blue ribbon at the New Mexico State Fair for her lapidary work. She also carved avocado seeds, made molds and did plaster casting. She was mechanically inclined and good at fixing cars. Over the years, Stephanie also did automotive transport and worked in machine shops. In many ways she was ahead of her time, refusing to be constrained by gender stereotypes.
Despite a long remission in the early 2000s, Stephanie struggled with homelessness and self-neglect in her later years. In 2018, she traveled to Ecuador to live with her daughter’s family and her former partner, John. When they returned to the U.S. in 2020 due to a medical crisis, Stephanie disappeared again. It was only recently that Stephanie turned up and was hospitalized in Grand Junction. It is ironic that Stephanie should show up in Grand Junction, since, a century ago, Stephanie’s great-grandfather, Charles K. Homburg, had served as Grand Junction’s Parks Commissioner, City Clerk, and Editor/Publisher of multiple local papers. At the time of her hospitalization, Stephanie was planning to relocate to Kremmling to be close to her daughter’s family as well as her dear friend and former partner, John.
While Stephanie’s life was fraught with difficulty, her life ended on a good note: She left this world thinking clearly and emotionally balanced. Her family encourages others to reach out in their communities, whether helping others or asking for help. Please get regular medical care, and if you use tobacco, please quit.
A private graveside service will take place on Friday, May 28, 2021 at 11:00 am at Riverview Cemetery in Kremmling. In lieu of flowers, the family requests that donations be made to the Skid Row Housing Trust at 1317 E. 7th Street, Los Angeles, CA 90021.

To order memorial trees or send flowers to the family in memory of Stephanie Zoo Benedict, please visit our flower store.