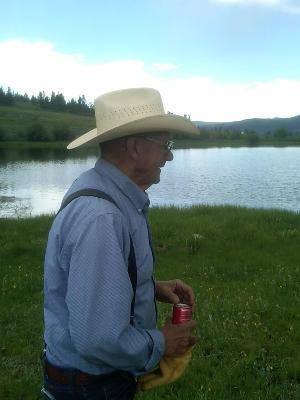 Charles Wesley "Skip" McClelland was born in Tiffin Ohio on January 22, 1925. At the age of 17 he entered the World War II aboard the Aircraft Carrier USS Enterprise and received two Bronze Stars. He served until a Komikaze attack at the battle of Okinawa. After the war he traveled the country and worked on several dam and water projects, as a surveyor/engineer. In Arkansas he owned a roller skating rink. After the mysteriously burning of the rink, he went to California and played professional roller hockey, to pay off the debt.

The Williams Fork water project relocated him from Arvada to Granby in 1956. Skip made Grand County his home ever since. During which he owned a land surveying company. Served as County Surveyor for almost 20 years. He lived and ranched at the east end of the airport for more than 50 years. The McClelland ranch has been known to have everything from horses, sheep, longhorns and goats to beautiful birds.

Skip was an exception pool player and spent time playing in professional tournaments across the country. For more than 2 decades he was also the pool shark that ran the tables at the Lariat Saloon.

He led a life that was hard, independent and adventurous. He was a complicated and talented man. His love of life was equaled only by his love of family and friends. He held a great love for the land and the people of Grand County. He will be missed and we give him into the hands of God.

To order memorial trees or send flowers to the family in memory of Skip Charles Wesley McClelland, please visit our flower store.