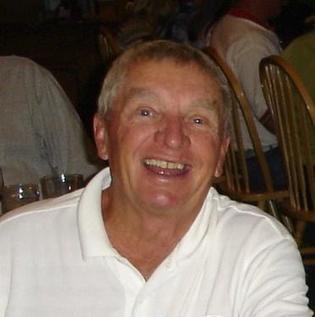 Roland "Rollie" Cahalane, 74, of Fraser, CO passed away on Sat. July 14th after a gallant two year fight with Glioblastoma, cancer of the brain. He was attended by Heart of the Mountains Hospice in his home. Rollie was born on December 16, 1937 to Ray and Elizabeth Cahalane in Cheyenne, WY. Rollie graduated from St. Mary's High School in Cheyenne and attended the University of Wyoming in Business and Accounting and made the decision in his senior year to become a golf course superintendent. He retired in 2001 from Inverness Golf Club where he spent 22 years of his career. He left quite a legacy as his three sons also became golf course superintendents. He was a past president of the Rocky Mountain Golf Course Superintendents Association (RMGCSA).

Some of the most formative years of his life were spent in the U. S. Marine Corp. He was stationed in Hawaii and played on the Marine Corp basketball team.

He refereed high school/college football and basketball, and culminated his career refereeing in the Big 8 Basketball Conference. His love of basketball and football started in high school and he attended the University of Wyoming on a basketball scholarship his freshman year.

He is preceded in death by his parents. He is survived by his wife of 50 years, Carol and sons, Kevin (Eileen) and granddaughter Katie of Telluride; Dave (Stacey) and granddaughters Kaitlin and Emily of Monument and Craig (Kristen) and grandson Fletcher of Fraser. He is also survived by a sister, Roberta Popeck, of Lander, WY; a brother Mike (Marilyn) of Plattsmouth, NE and a sister Donna (Rick) of Farmington, MO. Also surviving are a sister-in-law and brother-in-law, Joanne and Everett Mill of Cheyenne and numerous nieces and nephews and a multitude of friends.

A rosary will be said on Friday, July 20th, 9:30 a.m. at Our Lady of Snow in Granby, CO. Mass of Christian Burial will follow at 10:00 a.m. After the service, there will be a Celebration of Life reception and lunch at the "Ice Box" Fraser Valley Sports Complex. Casual or golf attire is appropriate. His favorite expression "It's good to be seen" will always be remembered.

In lieu of flowers, donations may be made to St. Jude's Children's Hospital, www.Stjude.org , Ronald McDonald House, www.rmhc.org, or Heart of the Mountains Hospice, P. O. Box 140, Hot Sulphur Springs, CO 80451 in memory


Send a condolence to the family, share a photo or story on Rollie's "Book of Memories web page at www.grandcountymortuary.com Mark H. Shearon, Funeral Director at Grand County Mortuary is handling arrangements. 970-725-9010.

To order memorial trees or send flowers to the family in memory of Rollie Cahalane, please visit our flower store.