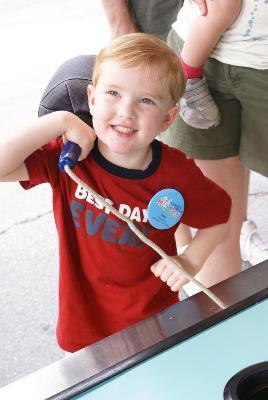 Riley Andrew Degginger, 5, of Granby, earned his angel wings peacefully on Saturday, August 4, 2012, after a year-long battle with a rare brain cancer called Diffuse Intrinsic Pontine Glioma (DIPG). He was in the arms of his parents, Andrew and Mary Ann Degginger, and with his little sister Micah.

Riley was born in Denver on March 4, 2007, and then began his life of adventure at Snow Mountain Ranch - YMCA of the Rockies, where his family lived. You could say Riley was raised by the staff and many campers at Camp Chief Ouray, where he was a favorite frequent visitor, often in costume for theme parties, or to sing along at campfires.

Riley was bright and funny with a sense of humor beyond his years, and he loved to play, dance, sing and tell jokes. He was a fierce competitor at board games and cards. From an early age Riley loved sports, and he began playing mini golf at Snow Mountain Ranch when he was only 2. He was a great putt-putter and got his first hole-in-one in November 2011 on his Make-A-Wish trip to Disney World.

Riley loved gymnastics and enjoyed hiking, playing and enjoying what his mountains had to offer. Sister Micah was his constant companion and friend. They attended Eternal Hills Christian Preschool in Tabernash together, and Riley was very proud to graduate in June.

A service to celebrate Riley's life will be held at 10 a.m. on Friday, August 10 at Church of the Eternal Hills in Tabernash. In lieu of flowers, the family suggests memorial donations to Snow Mountain Ranch for the Miniature Golf Course, Children's Hospital Colorado Neuro-Oncology, or the Make-a-Wish Foundation. See http://www.grandcountymortuary.com/book-of-memories/1303888/Degginger-Riley/index.php or http://www.facebook.com/pages/teamRAD/154994174582173 for more information on these charities.

To order memorial trees or send flowers to the family in memory of Riley Degginger, please visit our flower store.