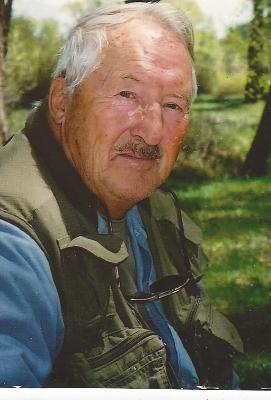 Paul joined the army at 17 to avoid painting the family barn. He ended up spending his whole time at sea painting the ship on his way to Manilla as part of the occupational forces.

He was discharged from the Army in 1949 and landed a job and a cute girl. He convinced Madalyn Main to marry him on their second date and 64 years later still considered her his sweetheart.

Paul worked for State Farm Insurance for 38 years. In 1962 Paul and Maddy moved to Greeley, Colorado with 2 year old daughter Paula and newborn son Eric. Many friendships he made at work are ones he continued and valued until his death.

Perhaps Paul & Madalyn's greatest times were retiring in 1989 to their home in Ice Box Estates, Fraser, Colorado. It was here that they most enjoyed each other, their time with family, friends and the neighborhood which is like an extended family to them.

Paul was a devout St. Louis Cardinals fan since he was 9 years old, and a Denver Broncos season ticket holder since 1972. He enjoyed skiing at Winter Park where he covered his favorite runs since 1989. Paul enjoyed fly fishing with his son, grandson, and co-workers Lee Hooley and Mel Prothe. Madalyn turned him into an avid bird watcher and wildflower lover, which he enjoyed doing on their lot in Fraser.

He was actively involved in the community as a volunteer at Grand County Historical Association, and Fraser Seniors for many years. He looked forward to the weekly lunches with the Fraser Seniors where he and Madalyn had many friends.

Paul left his spirit imprinted at home March 16, and left his physical body on March 18 at Denver Health Center.

To order memorial trees or send flowers to the family in memory of Paul Hendren, please visit our flower store.