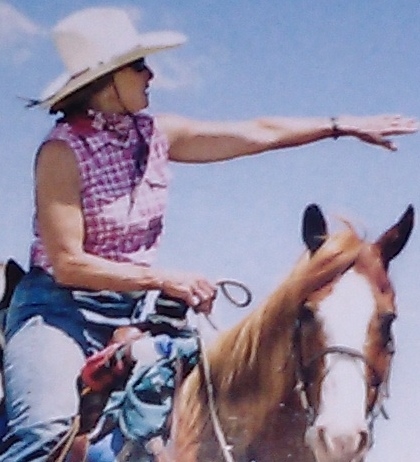 Grand Lake Pioneer, Mary Baumberger, 81 died peacefully in her sleep with her family by her side. Mary was born in Granby, Colorado up CR4 in a cabin in the meadow on her father's homestead. She was born December 9, 1934 to Jack Digor and Mazell Hill. Her father had come here from Czechslovokia when he was 14, met his wife in Royston, Georgia and found their way to Grand Lake. They homesteaded their ranch, part of which is now known as Granby Reservoir all the way up CR4 to the back meadow.
Mary attended the night school which was under the lake and then later moved up on the hill with children from many different grades. Grace Eslick was her teacher. She then went on to MPHS and later went to beauty school.
Mary moved to the state of Washington because her sister Fran had moved there with her husband John Carter. It was here that she met Earl Baumberger, fell in love and married. Together they moved back to Wheatridge, Colorado where they had their daughter Kathie and Mary had a successful beauty business in her home for 13 years.
After Mary's father Jack passed away, they moved back to the ranch and Mary started a stable business. Mary also raised all kinds of unusual animals. She raised Nubian goats, Gelbvieh cows, Buffalo's and Yaks. She called the mix Yak-alo's. Mary also raised manx cats. She liked anything that was different from everybody else. She loved animals, gardening, fishing, hunting, painting and she loved to spend time with her friends and have a cup of coffee.
Mary was honored at the Kremmling Fair a few years ago for being one of Grand County's First Pioneers, an honor which she found greatly rewarding.
Mary was preceded in death by her loving husband Earl Baumbergr, her father and mother Jack and Mazell Digor, and cousin Sandra Carter. Mary is survived by her daughter Kathie Baumberger, her grandson's Ryan Baumberger, Kyle Scarbrough, Dustin Scarbrough, Brandon Scarbrough, Grandchildren Kaylee Scarbrough and Jacob Scarbrough, Sisters Francis Carter, Judy Labriola and brother Steven J. Digor.
Mary was an unforgettable woman and will be missed by all who knew her. Funeral services will be held at 12:00 Friday, November 18, 2016 at St. Ann's Catholic Church with Fr. Michael Freihofer. Reception will be held at Pancho & Lefty's with a potluck following services.

To order memorial trees or send flowers to the family in memory of Mary Katherine Baumberger, please visit our flower store.