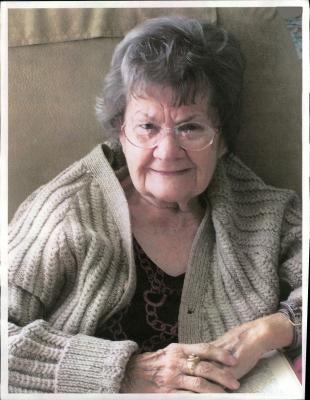 
Marie Louise was born Feb. 6th, 1921 in Paris France to Louis and Henriette LePerff. She attended and graduated an all girls Catholic school in Paris. After her schooling, she had a job working at a movie film distributorship where she met her future husband who was stationed in Paris with the American Occupying Army. Mr. Tucker made daily stops at Marie's work place to exchange movies and a romance blossomed. They were married Oct 9, 1945.

After the war ended Mr Tucker returned to Kremmling and Marie Louise joined him several months later after her boat trip and fulfilling the requirements at Ellis Island.

Kremmling Colorado in 1946 was quite a change for a big city girl, but she adapted.

One of her many accomplishments early on was to become a naturalized citizen, so she could vote for "IKE" for president. (the WWII supreme allied commander) Marie Louise had a high regard for WWII veterans and the Armies that liberated Europe. Every June 6th was a day to honor the men of the Normandy evasion and there was a special dinner for her family and one or two WWII veterans and their families as guest.

She was an accomplished seamstress having made clothes, gowns, and dresses for her family, friends and neighbors.


Marie Louise was an excellent cook spending a lot of time in the kitchen. Her husband of 64 years, W.G. "Tony" Tucker preceded her in death.

To order memorial trees or send flowers to the family in memory of Marie Louise Tucker, please visit our flower store.