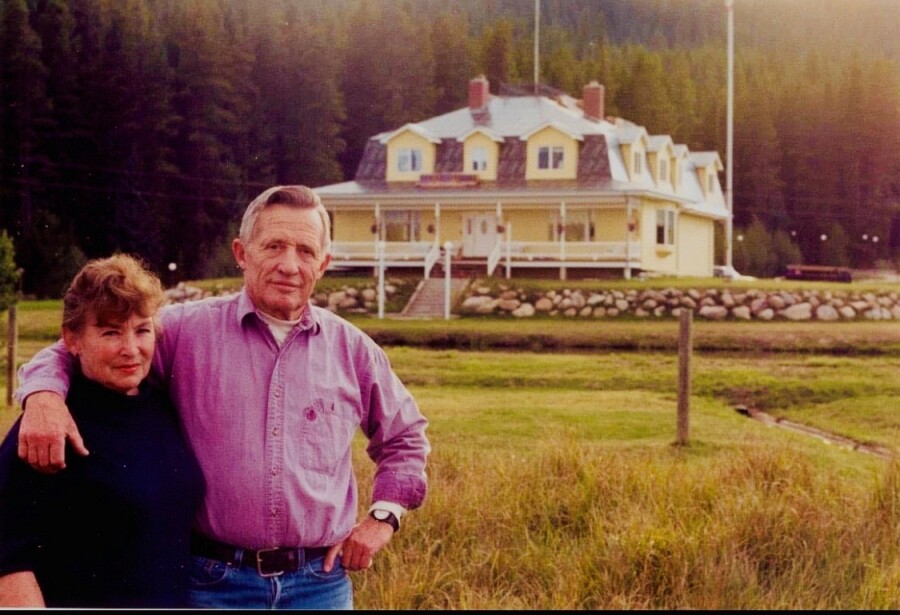 Lyle Wayne and Marylin Mildred Novakovich Hileman passed away together on the evening of October 21, 2020, at peace and in each other’s arms at the height of the East Troublesome wildfire.

Lyle was born in Denver, Colorado on March 18, 1934, the fifth child of Glenn L. and Lillian R. Gustin Hileman. He grew up in Lakewood, Colorado near 6th Ave., which at the time was a dirt road. His influence in the community began at an early age when a pneumatic vehicle counter was laid across the road; he added hundreds of hits with his father’s hammer, thus helping to establish West 6th Avenue as a major Denver thoroughfare.

Marylin was born on June 9, 1936 in Murray, Utah. Her family later moved to Wheat Ridge, Colorado. She was the second of five children born to Stephen and Amy Cleo Jenkins Novakovich. She had an adventurous, fun-loving, and independent spirit.

Lyle and Marylin met while attending Wheat Ridge High School. Their first date was at the Elitch Gardens amusement park. Lyle knew from the start that she was the one for him, and his persistence in courting her is part of the family legend. Marylin took some convincing, but not for too long. They were married in Georgetown, Colorado when he was eighteen and she was sixteen years old. From that point on they never looked back, only forward. It was the beginning of their 68-year love story.

Lyle was a building and concrete contractor, and a career Denver firefighter. He LOVED to work and demanded excellence of himself and others. He detested “burning daylight” and insisted on an early start to each day. Said one subcontractor, “a lot of wives in Granby will be glad when this building is finished…Hileman calls at four in the morning and wakes up the whole family!” He brought out the best in others. As soon as her five children were all in school, Marylin got her GED and then attended Metro State College in Denver; she graduated summa cum laude. She went on to become a mental health worker at Fort Logan Mental Health Center for 26 years. She dearly loved the patients there, and often took them out shopping on her days off. Marylin was the consummate homemaker. Her greatest joy was giving love and extending hospitality to friends and family. And there were lots and lots of friends and family. Marylin’s meals and candy counter were legendary, and she was a prolific hiker!

Lyle and Marylin’s home in Grand Lake was the “go-to” spot for family and friends for over thirty years. Their children, grandchildren, and great-grandchildren visited as often as possible. Lyle and Marylin’s love and kindness was a magnet that drew people in. Each visit touched their hearts, and each visitor left a piece of their own heart behind. Grand Lake was and will remain a special family gathering place.

Lyle and Marylin were faithful, dedicated members of the Church of Jesus Christ of Latter-day Saints. Lyle was instrumental in the construction of their beloved Granby congregation’s church building. They dedicated their lives to church activity and service, each serving in many church positions over the years. They especially enjoyed their weekly church work in the L.D.S. Denver Temple.

The wildfire that took their lives left nothing behind but treasured memories and a heritage of Christ-like love and service. That, in the end, was their greatest gift to all who knew them.

A virtual memorial service is being planned for November 21, 2020 at 11:00am by Grand County Mortuary, Hot Sulphur Springs, Colorado.

The family suggests that charitable donations in Lyle and Marylin’s memory can be made to the GoFundMe page that has been set up to assist the seven Grand Lake first responders who lost their homes to the East Troublesome fire while they were serving to save others’ homes and lives. The link for this website is https://www.gofundme.com/f/firefighter-who-lost-th...

To order memorial trees or send flowers to the family in memory of Lyle & Marylin Hileman, please visit our flower store.