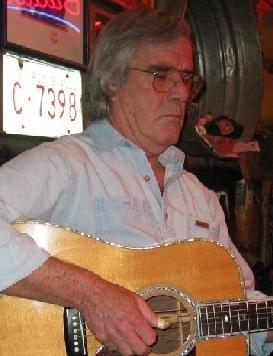 Larry was born on June 1, 1944 in Orlando, Florida. He lived in New Mexico as a child where he learned about the Native Americans of the region and found his love of acoustic guitar music, often telling the story of riding his horse to the post office to pick up his first guitar which had been ordered from the local Sears store.


The family relocated to California where Larry continued his music and love of football and golf. He attended Arizona State University where he played football and upon graduation accepted a job working as a contract administrator for Lockheed Martin in Hawaii. Larry left Hawaii to return to California where he continued his music career by securing a long running music contract at San Francisco's Drinking Gourd establishment, teaching guitar theory at UCLA, and forming his own band. He and his band traveled the U.S. for years playing with the likes of Ricky Nelson and The Carpenters.


Tiring of life on the road Larry turned to his second love, golf receiving his PGA card and working to develop and operate golf courses in New Mexico (Rio Rancho) and Texas (Green Tree), and evidentially coming to the Metropolitan Golf course in Grand Lake where he worked until retirement. Most recently Larry served on the Board of Directors of Grand Lake Metropolitan Recreation District where he was instrumental in reforming the General Recreation Program in 2012.


Larry is survived by his wife, Judy Burke, his daughter Daylyn Freeby (Jason), his grandchildren, Vivian and Luke, of San Diego. Also surviving Larry are his sisters, Faye August (Jim) and Jeanie Skrondal (Mark), two nephews Stewart and Spencer all of California.


Larry was best known in Grand Lake as Bish (or the Back Porch Light) playing with Steve Cormey at the Lariat Saloon on Sunday nights and at the Waconda patio on Saturdays. Larry played his own original music, most of which was about the Grand Lake locals, the Rocky Mountains, the environment, and Native Americans. Larry played and co-wrote many of Steve Cormey's songs and played acoustic guitar backup on most of Cormey's CDs and recorded his own original music on a number of CDs including a compilation of local musicians music as a fund raiser for the Rocky Mountain Repertory Theatre. One of Larry's most favorite activities was spending the summer afternoons playing and writing music with his friends and his dogs on the Front Porch of his home.


There will be a short service with Larry's family and friends at Point Park at 11:00 am, on Saturday, September 29th.


Donations may be made to the Independent Sports Club or the Mountain Family Center.

Leave a condolence for the family, share a story about Larry or add a photo to his "Book of Memories" at www.grandcountymortuary.com. Mark H. Shearon, Funeral Director, Grand County Mortuary, is in charge of arrangements. 970-725-9010

To order memorial trees or send flowers to the family in memory of Larry Bishop, please visit our flower store.