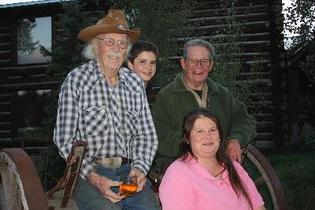 
Kenneth Lee. Bruton, 89, of Sun Valley Ranch in Grand Lake, passed away on Oct. 14, 2014 at St. Anthony Hospital in Lakewood following a brief illness. He was born on Aug. 15, 1925 in Chickasha, Okla. to parents Joseph and Edith Bruton. When Ken was two, the family moved to Kellerville, Tex. where he spent his school years. He graduated from McLean High School in 1943 and proudly served his country in the U.S. Naval Air Corp while attending the University of North Carolina. Following World War II, he attended the University of Oklahoma, and majored in engineering. Ken settled into married life in Amarillo Tex. with his first wife, Betty Lou Roth, from 1946 to 1956, and to that union three sons were born: Lee, Jerry, and Joe. Ken moved to Denver in the late 1950s where he operated his own boating business, Fore and Aft Marine. He was married to Carolyn Read Scott from 1957 to 1978, and added one daughter, Susan, to his family by adoption. In 1964, Ken purchased Sun Valley Guest Ranch, which he operated until 1982, touching the lives of many guests and crewmembers. He then converted the guest ranch to Sun Valley Ranch Estates, while building custom log homes. Ken married Shawn Simonds in 1997, and to that union one son, Thomas, was born. He continued log home building until the age of 80, and remained active in the day-to-day operation of the ranch until his passing. Throughout his life he relished the wild-west cowboy life, a love of ranching, and a love for the great outdoors. He was an avid storyteller, and fervently enjoyed entertaining friends-old and new-at the ranch. His passion in later life was coaching and imparting life-learned lessons and strong ethical values to his son, Thomas. Ken was blessed to live in Grand Lake for 50 years, which allowed him the opportunity to enjoy numerous outdoor activities, including raising, training and showing Appaloosa horses, trail riding and horse packing, hunting, snowmobiling, and skiing.

Ken was preceded in death by his parents, and his brother Joseph Douglass. He is survived by his wife, Shawn, and their son, Thomas Jordan, his adult children Kenneth Lee Jr. (Carolyn) of Golden, Jerry Don of Los Gatos, Calif., Joseph Henry of Pueblo, and Susan Leigh (Brian) Wiseman of Grand Junction, his sister, Meta Haanstad of Tucson, Ariz., as well as 11 grandchildren, four great grandchildren, and numerous nieces and nephews.


A memorial celebration of Ken's life will take place on Nov. 8, 2014 at Trinity Church in the Pines in Grand Lake, starting at 11:00 a.m. with a reception to follow in the church. In lieu of flowers the family would appreciate memorial contributions payable to the Ken Bruton Medical Contributions fund at U.S. Bank, PO Box 439, Granby, Colo. 80446, 970-887-3361.

To order memorial trees or send flowers to the family in memory of Kenneth Lee Bruton, please visit our flower store.