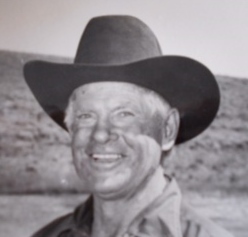 John was a longtime rancher in Colorado, raising cattle on the land his parents purchased in 1909. He was born in the old ranch house and as a child rode horseback to the one- room school house in town, fording the Fraser River before the first bridge was built.

In 1955 John married Edith Clark and they had two children, Jennifer (Baker) and Steve. Upon Edith's death in 1959 John raised the children with the help of family and good friends and ran the ranch.

He married Carolyn Hudak in 1979 and together they ranched until 1993 when John decided it was time to slow down. In retirement he was able to fulfill his lifelong dream of travel by making a safari to Africa, cruising the Inside Passage of Alaska and taking a walking tour of Ireland, his country of ancestry when he was 87, walking 4-7 miles a day.

John was active in the Granby community serving for many years on the board of the East Grand Fire District, was president and board member of the Grand County Irrigated Land Company and sat on the board of the Middle Park Stockgrowers Association and the Soil Conservation District.

Funeral service will take place at our Lady of the Snow Catholic Church in Granby, Saturday May 6 at 10:00am with burial to follow at the Granby Cemetery. In lieu of flowers, donations may be made to the Middle Park 4 H Scholarship Fund, PO Box 475, Kremmling, CO 80459, or to your favorite charity..

To order memorial trees or send flowers to the family in memory of John B. Murphy, please visit our flower store.