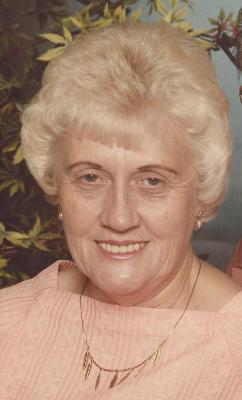 Barbara "Jeanne" Parrott was born on February 10, 1932 in Minco, Oklahoma to Clarence "Rudy" and Mary Parrott. Jeanne moved to Grand County with her parents in 1937 so her father could work as a ranch hand and her mother as a cook on their brother-in-law, Fay DeBerard's ranch now called the Grand River Ranch. In 1941 the family moved to the Bill Yust Ranch on the Blacktail where Jeanne worked side by side with her "Daddy" running cows for DeBerards. One of her fondest memories was riding her horse "Slim" to the one-room Blacktail School house above Radium. She said some of her not so fond memories during this time was having to dig down through the snow to the haystack on Christmas Day to help her Daddy feed cows at the McMillan Homestead on the upper Blacktail or driving a tractor to the main ranch over the one lane Trough road with part of the tractor tire hanging over the edge. When Jeanne reached high school age, her parents decided to move to town where they purchased and ran Rudy's Motel and Groceries. They would provide rooms for some of the kids from the Sheephorn during the winter while they attended high school at Kremmling Union. While attending Kremmling Union, Jeanne became friends with Vera (Shay) and LaVerne (Bock) Stathos who introduced her to their sailor brother Marion when he returned from World War II. Marion and Jeanne were married September 15, 1949 in Hot Sulphur Springs, CO with Vera Stathos and Robert Shay standing up with them. In the Spring of 1952, their one and only child, Linda Kay was born on April 7th. Through the years, Jeanne helped run the Phillips 66 gas station in Kremmling which she and Marion owned, waited tables at Jerry's Café and worked at Clark's Pharmacy as a cashier. Jeanne then found the passion of her lifebowling. She excelled in it carrying a 170 average and bowling a 266 and numerous 600 series. She loved bowling so much that she got a job running the bowling alley during the day for Bill Knorr. She became a bowling instructor and taught many of the Kremmling youth. Marion and Jeanne were both adventurous and both loved to travel. It was nothing for them to take off in January when the winter was cold and business was slow with their daughter and little camp trailer to travel all over Mexico for 3 months at a time. They lived in Anaheim, California, Redding, California and Glenwood Springs but finally decided to make Kremmling their home. Jeanne was never one to sit around as she was raised that hard work was just part of life and she had a zest for learning. She learned electronics while in California, flower arrangements and care while owning the local flower shop for several years. She then mastered the craft of upholstery when she started her own upholstery business out of her home while keeping books for her husband's construction company. In 1986, being the adventurers they were, Marion and Jeanne decided that the Grand County winters were too long and too cold, so they partnered with her brother Terry and Rynda Parrott and friends Frank and Marilynn Jesmer, to run a marina on Navajo Lake in southern Colorado. After 6 years they decided that it was time to retire and moved to Parachute, CO, so she could be close to Mesa State College where both her grandchildren, Becky and Tim, attended college. Continuing their nomad lifestyle, they then moved to Cedaredge, CO and then to Delta, CO. In later life, Jeanne was a caregiver for her mom and Marion. After they were gone, she kept being a caregiver to whomever might need her. It was nothing for her to jump in her car with her little dog Chubby and travel to family in need as it delighted her to help out. Marion passed away on April 7, 2007 so Jeanne decided that it was time to move closer to her daughter and brother in 2009. Saying that the winters were still too cold in Kremmling, she decided to live in Lakewood where she passed away on April 19, 2012. Jeanne loved to play games and would sit all day if she could find someone to play cribbage, dominos, pinochle, or any card game. We are sure that she is playing dominos with "Nana" her mom at this very minute!


Fondly referred to as Mom, Grandma or GG, she was preceded in death by her father, mother and husband. She is survived by her daughter Linda Haynes (Ken), brother Terry Parrott (Rynda), Granddaughter Becky Lemley (Larry), Grandson Tim Haynes (Jenna) and great grandsons Cody and Trent Lemley and Cooper Haynes, Sister-in-law and brother-in-law Lloyd and LaVerne Bock and many nephews and nieces.

To order memorial trees or send flowers to the family in memory of Jeanne Stathos, please visit our flower store.