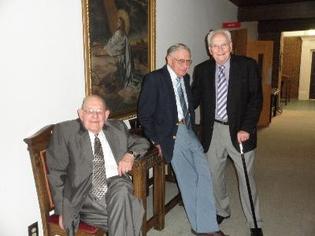 Jim Williams passed away suddenly at his home near Tabernash, CO on Thursday, June 30, 2011. Jim was born in Bartlesville, OK on January 28, 1929. He was the only child of Leonard and Melba Williams. After graduating from Classen High School in Oklahoma City he went to Oklahoma State University where he completed a Mechanical Engineering degree. In 1950, he enlisted in the US Army and was based in Colorado where he developed a life long love of the Rocky Mountain High Country.

While serving in an Engineering Unit, as one of the only degreed engineers, he rapidly rose to the rank of Master Sergeant. Believing he was headed to the conflict in Korea, he boarded a troop ship. His unit was unloaded in Japan where they served in the army of occupation at Sugamo Prison. While there, he helped dismantle and destroy the materials of the gallows where high ranking Japanese war criminals had been executed. He returned to Oklahoma in 1952 and married Helen Maxine Bontly, who had waited for him there.

He also returned to his job at Oklahoma Natural Gas Company as an engineer trainee. Over a 36 year career with the gas distribution company, he rose to the position of Vice President of Technical Support. Many of his closest friends were employees reporting to him, indicating what kind of boss he was.

The Williams are the parents of two daughters who also graduated from Oklahoma State. Barbara Williams stayed in Oklahoma, working for an interstate gas pipeline until 2000 when she moved to KS and retired last year. She was with her parents at the time of Jim's death. Beverly moved to CO after graduation and married Dan Ferguson. They have raised two daughters, Lindsay and Stefanie and live in Broomfield where Bev is the Director of Finance at BalSwan Children's Center.

After his early retirement in 1986, Jim and Helen came to Grand County and built their retirement home near Tabernash. Jim, a long time Rotarian, helped form the Granby Rotary Club. They were active in their church and served on the board of Grand County Community concerts. For years they enjoyed skiing and hiking in the back country. They have many wonderful friends in Grand County.

Jim got his wish to live for the rest of his life in the mountains. He is survived by his wife Helen, daughters Barbara Williams, Beverly Ferguson, her husband, Dan Ferguson and their daughters Lindsay and Stefanie.

Wishes can be sent to the family at grandcountymortuary.com. A celebration of Jim's life will be held at the Church of the Eternal Hills in Tabernash at 1:00 PM on Saturday, July 9 with reception to follow in the fellowship hall. The Williams Family hopes that all of Jim's friends will join them at this season's final concert of the Grand County Community Concert Series on Sunday July 10. Jim loved the Denver Brass and we are certain that he will be joining us in spirit for this concert.

To order memorial trees or send flowers to the family in memory of James Williams, please visit our flower store.