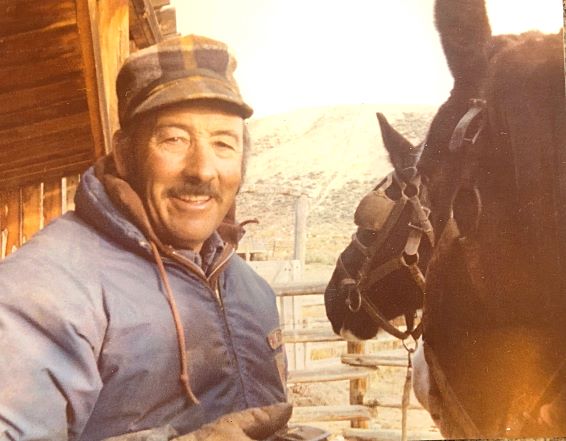 In his 93 years, Jim Taussig did and saw many things.  As a very young child he drove a team of horses to school.  He ate a muskrat, ran away from home, roped an elk, castrated someone else’s full-grown bull, and countless other (questionably naughty) activities.  In his lifetime he experienced living without electricity and running water, lived through the Depression, witnessed the advent of computers and televisions, and watched people walk on the moon.  He worked as a cowboy, a paratrooper, a ski instructor, and a rancher.  Jim had so many near-death experiences that it does not seem possible for someone to be lucky that many times.

Jim was born on February 21st, 1926 at St. Joseph’s Hospital in Denver, CO to Willard and Clara Taussig.  When mother and baby were ready, the family returned to the ranch at Ute Park south of Parshall, CO (now under the tailings pond at the “AMAX” molybdenum mill).  He joined his two older siblings, Marge and Bill in youthful adventures way up the Williams Fork.  Jim’s younger siblings, Jack, Marilyn, Don, and Miriam, were born into the family over the next fifteen years.

Willard and his brothers Carl and Paul raised registered Hereford cattle at the Ute Park place during Jim’s young life.  The Taussig children drove a team to the one-room Ute Park School from the time they were 5 and 6 years old.  Upon their arrival at school, one of the older students would unhook the team, as the Taussig children were too small!

When Jim was still very young, the three Taussig families moved down the Williams Fork valley to the Coberly ranch (now owned by the Denver Water Board), where they continued to raise registered Herefords and sell bulls.  Bill, Jim, Jack, and Cousin Harold would ride in box cars with the show cattle as they traveled on trains to Stock Shows across the country.  One haying season during a lunch break, Max Kennedy (a 20-something hired hand) was boasting that he owned the best horse in Middle Park.  Although he was only 14 years old at the time, Jim spoke out that he could out-do Max in a race.  The older man then suggested that they wager $100 on an endurance race from the Coberly over Jones Pass to Empire, CO.  Jim wanted to take his dad’s good horse, Slim, but was a little afraid of Willard getting mad so he chose to ride the grey, who didn’t have an actual name and was a little lame on a front leg.  Although Jim had never ridden that route (or ridden to Empire at all), he followed Max’s paint horse at a trot all the way up the Williams Fork and over the pass.  About a mile out of Empire, Max Kennedy over-and-undered his horse into a gallop.  Jim followed suit, and his grey outstripped the paint just before they reached the town.  Jim’s cousin Carl Jr. was waiting in Empire with a two-ton stock truck to take the horses and riders back to the ranch.  The grey went on to live a great life as a ranch horse, but the paint horse’s chest swelled up and he never recovered.  Jim didn’t think he needed $100 so he tried to donate it to help build the new Parshall Chapel, but his uncle Paul refused to use gambling money to fund the church!

After graduating high school in 1943, Jim joined the Army and went to basic training.  As he told it, one night early in his Army career he had a wild night in town and had to be knocked unconscious by the military police in order to be returned to camp and thrown into the brig.  Luckily this experience did not end his military career, as he later volunteered for jump school and trained as a paratrooper.  After completing training, the Army asked for volunteers for the basketball team and Jim volunteered to play as he loved the game.  His father Willard, with help from the Governor of Colorado, got Jim honorably discharged to come home and help on the ranch.  Willard said, “He’s just playing basketball and we need help!”  Jim never saw action in WWII.

Jim married Faith Oltrogge in 1949 and together they attended Wheaton College in Illinois.  A semester shy of graduating, Jim once again returned home as he was needed on the ranch.  Jim and Faith had five children together: Sharon, Becky, Chris, Randy, and Mitch.

The Taussig family loved to ski and had developed a small one-run ski area known as Pease Hill up the Williams Fork.  In the early 1950s along with the McElroys and other families in the Kremmling area, they went to work developing a ski area on Baker Mountain, which is just south of Muddy Pass and can be seen on the west side of Highway 40 on the drive to Steamboat.  They marked trees for removal in the winter and couldn’t find them the following summer until they looked way higher up the trees.  There was so much snow that the marks were over 15 feet up the tree trunks.  The ski area was abandoned after three years because there was too much snow to keep the access road open.  Jim was passionate about skiing and went on to become an early instructor at Winter Park Resort where he taught lessons for 12 years.

The family moved further down the Williams Fork onto the Stein ranch (now Reeder Creek Ranch) when Jim was 26 years old.  Willard and his family worked hard to grade and develop the hay meadows, and to lengthen and expand the Big Lake Ditch to 27 miles long with a D6 dozer.  Jim was a master irrigator and waterman, and he spent much of his life running the headgate for the Big Lake Ditch.  In the early days, Jim and his brothers would fell trees upriver and drag them down with lariat ropes to dam the Williams Fork and fill the ditch.  Eventually, they ran out of suitable trees and installed river gates across the river.

Jim and Faith divorced in 1975 and he later married Vicki Baldwin.  They were married for 43 years until his passing and had two daughters, Cameron and Caitlyn.  In 2000, the Taussig family sold the Stein ranch on the Williams Fork and moved to the Hinman Ranch on the Muddy.

Jim passed away at his home on the Hinman Ranch on Wednesday, June 19th, 2019.  He was 93 years old.  He is survived by his brother Jack, Sister Marilyn, wife Vicki, his seven children (Sharon Young, Becky (Jerry) Eller, Chris (Tom) Schoenberg, Randy Taussig, Mitch (Randi) Taussig, Cameron Taussig, and Caitlyn Taussig), seven grandchildren, and three great-grandchildren.  Jim’s wishes were to be cremated and have his ashes scattered at the headwaters of the Williams Fork River, which irrigates the ranches he worked and loved.  The family is planning to hold a private celebration of life at a later date.

To order memorial trees or send flowers to the family in memory of James "Jim" Edward Taussig, please visit our flower store.