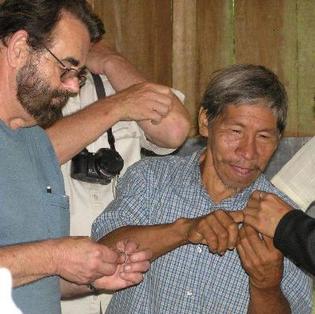 A funeral service will be held on Tuesday, August 25, 2015 at 2PM, at the Parshall Chapel, Parshall, Colorado.

1962 in Colorado Springs, CO at Penrose Hospital. His parents names

are Alvin and Dorothy Yost. He grew up with brothers James Alvin,

in California. He married his High School sweetheart, Norma Bishop in

July of 1962 in Paris, Idaho. They have two daughters Suzette Marie

and Linda Kay Yost. he had a very interesting work career over the

Universal Studios. Gary, then worked for Edwards Laboratories in

California making casts for heart valves for humans. Later, he was a

specialist master in mechanics; he helped design and build a speed

boat that set a world record. He retired from Missouri Metals, where

he was a specialist in titanium, designing parts for the space

industry and military contracts for Boeing and Bell Helicopter. He was

a member of First Baptist Church in O'Fallon, MO; he served as the

Director of the Singles Department. Being outdoors was something that

he really enjoyed, especially fishing. NASCAR races were another sport

that topped his list. When he retired, he and Norma bought land in

Kremmling CO and were building a house that has a sweeping,

breathtaking view of the valley. He felt one of his greatest

accomplishments was a trip to Ecuador. His nephew, Nate, coordinated

the trip. Gary went with his brother Jim and Nate. Jim and his wife,

the Auca Indians. The trip was to educate them in the way motors work;

Gary had come up with some innovative ways to teach that to them. They

were just throwing tools away if they wouldn't start or run right.

Gary put toolkits together for each man. He removed the case from a

motor and replaced one side of it with a transparent plastic one, so

the men could watch what happened when the motor was running. He

taught them to repair equipment also boat motors. He is survived by

his wife of 53 years, Norma, 2 daughters, Suzette and Linda, his

host of cousins. He was preceded in death by his father, Alvin Yost.

To order memorial trees or send flowers to the family in memory of Gary Yost, please visit our flower store.