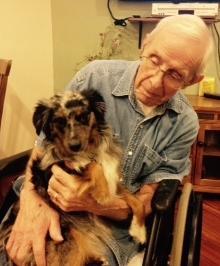 Edgar L Bateman, "Jake ", 83, of Kremmling, CO passed away March 30, 2015 at the Kremmling Memorial Hospital with his family at his side. Ed was born September 29, 1931 in Cleveland, OH to Edgar F and Margret (Romig) Bateman. He enlisted as a Seaman Recruit with the USCG on January 22, 1951 on the USCGC Winona until honorably discharged January 20, 1957 from the 2nd CG District in St. Louis, MO. He was given the Korean and United Nations Service Medal. He married Jessie Mina Kinzle February 11, 1955 in Kansas City, MO. He spent his life working Civil Service work in Colorado, Maryland, and eventually retiring in Great Falls, MT. He raised his children to enjoy the outdoors - hunting, camping - and a love for animlas. He and Mina moved to Kremmling in August 2010 to be closer to their kids. What a gift these last 5 years have been!

He was preceeded in death by his wife, Mina Bateman, his parents and his sister, Marilynn Jerome of Elyria, OH.

To order memorial trees or send flowers to the family in memory of Edgar Lewis Bateman, please visit our flower store.