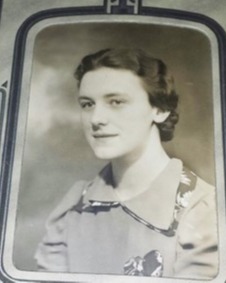 Dorothy “Dot” Marie Yost was born October 11, 1919 in Lewellen, Nebraska, the second of Charles and Geneva Roberson’s nine children. She grew up in rural Nebraska, but moved to Colorado Springs in 1940 where she married Alvin Yost. She delighted in her four children, Pat, Jim, Gary, and Rob, nine grandchildren and sixteen great-grandchildren.

Dorothy and Alvin raised their kids in Colorado Springs, and once the kids were grown, Dorothy returned to full-time employment working at Shepard’s Citations/ McGraw-Hill. After retirement she moved to Old Park near Kremmling in 1989 to be closer to a son and to the outdoors that she enjoyed so much. Watching the hummingbirds and deer in her Old Park yard gave her constant satisfaction.

The Yost house was noted for its open hospitality. More than once during hard times when Nebraska farming couldn’t support a family, relatives from both sides of the family moved in with Alvin and Dorothy in Colorado Springs while searching for jobs. The infectious sense of humor and crazy shenanigans in the Yost household still stand as lore for children and grandchildren.

Dorothy loved fishing, deer hunting and picnics in the mountains. Her and Alvin’s enthusiasm for nature, particularly flowers and birds, was passed on to their kids. Later in life, even when her eyesight was failing, Dorothy still anticipated a trip every Mother’s Day to go birding at the National Wildlife Refuge near Walden.

Dorothy was known as a great cook and particularly enjoyed baking imaginative  birthday cakes for her children and grandchildren. Her specialty was a realistic coconut-covered lamb cake baked in a three-dimensional antique cast-iron mold shaped like a lamb lying down.

Beyond all else, Dorothy’s faith sustained and fulfilled her. She and Alvin modeled lives that encouraged their children to love Christ and to serve Him.  In her final years she longed even more deeply for the day that she’d be with her Lord, and after 100 rich years on earth, Dorothy departed Kremmling, CO, on January 26, 2020 to celebrate being in the presence of Jesus Christ.

Dorothy is survived by her daughter Pat Ward of La Plata, MD, son Jim and his wife Kathie of Kremmling, CO, daughter-in-law Norma of Kremmling, CO, son Rob of Charlotte, NC, nine grandchildren, and fourteen great-grandchildren. She was preceded in death by her husband Alvin, son-in-law Ken Ward, and son Gary.

To order memorial trees or send flowers to the family in memory of Dorothy Marie Yost, please visit our flower store.