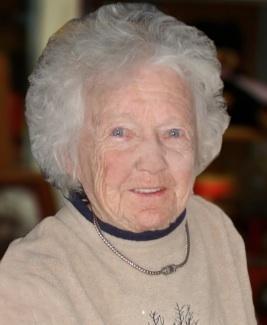 Dorothy Hammer, 86, died at her home in Parshall, Colorado on May 3, 2011. She passed away peacefully in her cozy store front home in the Rocky Mountains.

Born January 11, 1925, in Armstrong, Iowa to the parents of Olaf & Vera Iverson. Dorothy's family tree extends far, with deep roots from Norway and to the British Royal family where her grandmother's cousin was a Lady In Waiting to Queen Victoria. Dorothy was the oldest of four children; Cloris Jean Stoll, Virginia Bash (deceased), and Bill Iverson (deceased).

In 1974, this blonde haired Norwegian-English woman with stunning blue-eyes and her tall, dark and handsome husband took on a new adventure, leaving Westminster, Colorado to experience the culture of Khazal's boyhood home in Hillah, Iraq. After a couple of years, they moved back to Colorado settling in Arvada.

While living in Westminster as a mother and wife, Dorothy kept the city in style with the 1950's Beauty Salon that she owned and operated. Always the entrepreneur, Dorothy and Khazal left the city life that they turned into a baby boomtown for the peaceful mountain town of Parshall, Colorado in the early 1980's. They found gold alongside the Colorado River as the proprietors of the Parshall General Store & Dry Run Liquor Store, the Motel and the Post Office building. After her husband Khazal passed in 1994, Dorothy kept the town she loved so much stocked with much more than groceries and candy for the kids; she kept a kind, warm heart for all those who rang the General Store bell and walked through her doors. She engaged all those who crossed her path with her sharp wit and humor. All her customers were her friends and her friends were like family.

Dorothy was an avid bowler and official member of the PBA - not the Professional Bowlers Association but the "Parshall Bowlers Association". Although not a real association, it was real for her and her bowling team called "Just Us". They were a second family for her, another addition to her ever expanding extended family. This would be her last year bowling because she wanted to leave on top, just like the Bronco's Quarterback, John Elway, did.

She was such a fan of Colorado Sports (Nuggets basketball team, Rockies Baseball team, Bronco Football team and the Avalanche Hockey team). Anyone that came into her store knew if the game was playing because the TV behind her counter was either on with the sports games or if no sports were on playing, she was watching her old Western movies.

Orphaned in the great depression due to her parents passing, Dorothy always made the best out of the little things she had. Her motto, "as long as I have food and can pay my bills, that is all that matters" were words that she lived by during all of her 86 years. Dorothy gave so much of herself to anyone in need and to her beloved family, which has grown over the years, to include her three sons, Jimmy Hammer & K.C. Hammer, both of Kremmling and Ali Hammer (Mary Ann) of Craig, six daughters, Sue-Sue Hoffman (Danny), Laila Urban (Alan) both from Westminster, Najat Wood (Randy) of Aurora, Donna Comegys (Bob) and Barbara Cumpton (Fran), both of Iowa, numerous grandchildren (31), great-grandchildren (36) and great, great-grandchildren (7); and she is preceded in death by her son Saad Hammer (37), daughter Diana Janvrin (43) and grandchildren Saadia Hammer (28) and Dylan Janvrin (16).

She will be celebrated by the community, her friends and loving family who will greatly miss this very special lady and a lady she was.

To order memorial trees or send flowers to the family in memory of Dorothy Hammer, please visit our flower store.