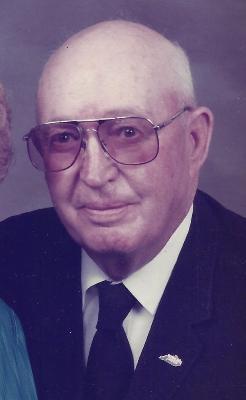 Given the green light the Old Iron Horse left this world behind, headed to the Big Rock Candy Mountain in the sky.


Clyde Lee Overholt, age 92 passed away in Kremmling, Colorado on June 14, 2012 after a long period of declining health.


Clyde was born October 26, 1919 to Elsie and Otis Overholt, on their family farm near McAlester Kansas. The fourth of eight children, Clyde was delivered at home by the local country doctor he grew up and attended school there in McAlester.


At age 17, he moved to Azure, CO where he helped his sister Wilma run a boarding house for railroad section hands. When offered a job on the Rio Grande Railroad he jumped at the opportunity. One of his first jobs was working with a welding crew replacing rails in the Moffat Tunnel. He retired as assistant road master in Kremmling after 41 years


In 1942 he was drafted into the army, and was shipped overseas and served with the 335th army engineers during World War II. He was honorably discharged in 1945.


Before shipping out, he met and married his wife of 67 years - Bernice. They med in Kremmling and were married September 7, 1942 in Muskogee, Oklahoma. Clyde was devoted to Bernice caring for her at home until she passed away in 2008 after a long battle with Alzheimer's.


Clyde was active in the community church, served two terms on the city council in Kremmling, was known for his biscuits and gravy, served in a food wagon at the fair grounds to raise money for the Grand County Historical Museum.


His tomato plants, pop can airplanes, oil painting, whirly gigs, and making peanut brittle for family and friends at Christmas were just a few of the things he loved to do.


A generous, gentle, and compassionate man, a faithful husband, and a steadfast friend, a love for and devotion to family, nation and God. To those fortunate enough to know him he was ever a ray of sunshine, always ready with a quip or joke, and easy smile. He will be missed

To order memorial trees or send flowers to the family in memory of Clyde Overholt, please visit our flower store.