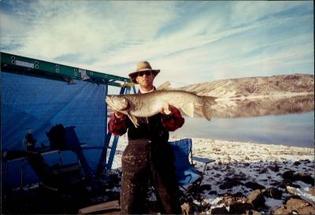 Chris Boydstun of Kremmling CO died in Kremmling CO due to Lymphoma on July 9, 2012. Chris was born in Porterville CA on July 20, 1963. He grew up in Phillipsburg MT where he stayed with his grandparents helping them run their bait and fishing store. Chris had two siblings Jeff and Layla. From Phillipsburg he moved to Alaska where he was a commercial fisherman on the Bearing Sea where he toughed out storms and Soviets, whom shot at them for getting to close to the Soviet Union. Then he moved back to Montana where he met and then wed Mara Jacobson on Jan 28, 1987. They had two children together Brittany and Cole. After having Cole they then moved to Breckinridge CO where he enjoyed breaking horses and was a trail guide at the Sombrero Ranch. Chris often loved to explore from the tips of the tallest mountains to the bottom of the lakes. Upon his exploring he stumbled upon Kremmling which he loved and called home for the remainder of his life. He was the world's truest and greatest mountain man. He loved to fish, camp, hike, hunt, ride horses and have a good time. Never in a hurry to go anywhere fast, he would say "I have the patience of a monk", which was so true after watching him with the grandchildren. After being in Kremmling for some time, and after separating from his wife, he found another family which he also grew to know and love. Korby Setliff and her children. All came together in the end to love and become one big happy family. Survived by Brittany (Boydstun) Klotz, her husband Bryan and their two children Aiden and Caleb. Cole Boydstun, his companion Jessie Stockamp and their child Grant Boydstun. His spouse Mara Boydstun. His companion Korby Setliff and her children Tim Setliff, Sarah(Setliff) Widener, husband Mackenzie and child Dominic, Jake Setliff, Celeste Setliff, and Meagan Setliff. Sharon Lee (mother). Siblings Jeff Boydstun, and Layla Godkin Brown. Proceeded in death by Lee Boydstun (father), and grandparents.

A memorial service will be held Sat July 14th, 2012 in Kremmling at the Kremmling Community Church at 3:00PM. Donations may be made for the family in care of Cole Boydstun, PO Box 813, Kremmling CO 80459.

Leave a condolence for the family, share a story about Chris or add a photo to Chris's "Book of Memories" at www.grandcountymortuary.com.

To order memorial trees or send flowers to the family in memory of Chris Boydstun, please visit our flower store.