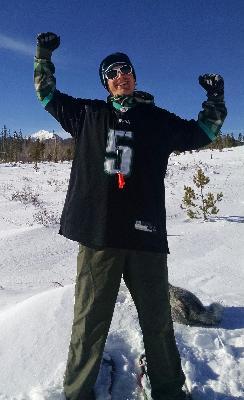 Brian Matthew Bommersbach (formerly of West Fargo, ND) passed away September 2nd, 2015, after a long battle with A.L.L., a rare form of Leukemia in Denver, Colorado.


Brian was born on December 31, 1975 in Fargo, ND to Terry and Kim Bommersbach. Brian attended and graduated from West Fargo High School. He was a young athlete that excelled at everything he was involved with from a young age to the end.


Brian was always a bright light in everyone's eyes. His family was always first with him and the outdoors were his sanctuary. He had love for every beautiful sight he could capture. His passion for everything he did whether it was his love for snowboarding or the music he listened to, he went above and beyond to get anyone else to feel the same way. His laugh was so contagious and his smile was so enlightening, and when he gave you a hug you thought he'd never let go. His fight through cancer was totally for his family and his dogs, never once did he worry for himself. When that fight got really hard, Brian relied on his spiritual roots to find solace. He loved to share a message of peace and positivity. Towards the end of his battle he reconnected with his Christian roots, and he was comfortably in the hands of his maker when he passed.


A Celebration of Life will be held on Friday, September 11, visitation 5-7 with service at 7, Boulger Funeral Home in Fargo, ND. There will also be a celebration of life on September 19th, from 4-7PM at 1221 county road 5 in Fraser, CO,


Brian will be missed by all those who knew him. Fly high our Great Eagle!

To order memorial trees or send flowers to the family in memory of Brian Matthew "Bommer" Bommersbach, please visit our flower store.