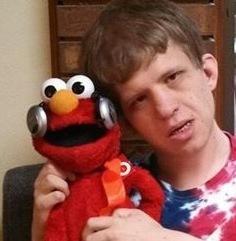 Benjamin William Wharton "Benny," the son of William and Jan Wharton of Grand Lake passed away on May 19, 2014. He died at his home at Columbine Lake where he had lived his entire life. He was 26 years old.


He died from a choking accident, common for people with his two genetic syndromes: Opitz FG syndrome and Koolen De Vries Syndromes. (Bolting food into their mouths, cramming food in to fill it enough to have the sensation to swallow) Ben had somehow stuffed a large carrot into his esophagus and even with courageous efforts from the Grand County EMTs and his parents, it was simply God's timing to call Ben home.


Ben was born on February 20, 1988 at Kremmling, CO, one of the last babies delivered there by Dr. Terry Grossman. He began his journey by being flown out of Kremmling Memorial Hospital to Children's Hospital in Denver in his very first hours. He had a life of medical challenges, but more than that he had a great life filled with love.


Ben treasured his friends! He attended Grand Lake Elementary, East Grand Middle School and Middle Park High School where all along the way he had incredible people to not only help him learn, but to nurture his personality. He had friends who sang with him, who had inside jokes with him and people who really connected with him. He especially loved singing in the choir, performing his lines in programs, and saying "Cheese" for all the group photos.


Grand County was a loving community for Ben as child with special needs. Horizons provided support right from the start and continued his entire life. His life was enhanced greatly through: Horseback Riding through SMaRT and NSCD, Adam's Camp at the YMCA, Grand Lake Rotary (who provided his first Q chord), Grand Lake Independent Sports Club, FV Rotary, Lion's Club, Middle Park Electric, Grand County Social Services, Rhythm Within, and many other groups! There were individual volunteers and community friends who shared their love, time, energy, and financial support for Ben. He was truly blessed, and his mom and dad appreciate this incredible community.


Ben was that sweet guy who always carried around Kermit the frog, or Elmo and had an iPod around his neck. He usually wore a Beatles T-shirt. You might have heard him singing "It's a Small World" or "Spoonful of Sugar," or maybe you saw him perform "Oh Shenandoah" or "God Bless the USA." He walked crooked and slowly, painfully. He


may have asked you about your favorite Beatles song. He often sang, "We all live in a Yellow Submarine" at Mountain Foods in Grand Lake.


Ben loved working at his job at Miyauchi's and eating ice cream. He loved riding horses, telling his stories over and over again, and making people laugh with his jokes, a really good squeak, playing his Qchord, watching home video tapes, and hanging out with friends. He especially loved singing at the Cabin Fever Follies, and when the applause came everyone enjoyed the jubilee on his face and the way he flapped his whole body.


Ben had more friends than most people have in their entire lifetime and he spoke of them often. He had a way of making unique connections. He will be loved forever!


Ben often said, "I have Jesus in my heart" and he truly did. He prayed for people. The second he heard someone was sick, he would stop in his tracks and pray for them - right then. He prayed for things that we lost. He thanked God everyday for his food and he always prayed to bring people "home safely." Ben is singing with the Angels and all the angels who have gone before him.


Ben's life continues on Earth through the donation of some of his life tissue, and his corneas, which could be used for others. He would be so pleased. God bless you Benny.


Ben is a perfect example of a life with a purpose, a meaning, and a mission. He lived his life with a purity that is rarely seen. He never once said anything to hurt anyone's feelings. He forgave freely. He enriched the lives of everyone who gave him a chance.


Ben once said at a funeral of a friend, " It's a world of laughter, a world of tears."


Ben is survived by William (Willie) Wharton and Jan Wharton, Grand Lake, CO Grandparents, William and Margaret Jeane Hill of Roachdale, IN and Speedway, IN. Brother Jason (Jake) Hatfield and wife Sarah Hatfield, West Palm Beach, FL Sister Lana Hatfield, Indianapolis, IN Nieces and Nephews: Emily, William, and Adam Buckner, Joseph, Nathan, and Evan Margaret Hatfield. Uncle Bill Hill and Aunt Dottie Hill of Roachdale, IN, Uncle Paul Hill of Speedway, IN, and Uncle Phillip Zillinger of Indianapolis, Uncle Larry Wharton and Aunt Normitta Wharton of Beltsville, MD. Many treasured cousins and second cousins who will miss him dearly survive him. Many, many dear friends in Grand Lake, Colorado, Indiana, and truly around the World And Bia, his doggie he loved till the end


A family service will be held at Roachdale Cemetery, Roachdale, Indiana on Saturday, May 31, 2014 at 12:00 noon. Alan Hughes will officiate. At 1:00 there will be a Celebration of Ben's Life at Roachdale Christian Church - Family Life Center for all friends and family, with all of Ben's favorite foods and salads provided by family and friends. Dottie Hill and Lana Hatfield will be coordinating.


There will be two Colorado Celebrations of Ben's life this summer June in Grand Lake, and July in the Denver area - both to be announced.


The family is asking in place of flowers that donations of any amount be made to Ben's beloved Adam's Camp - Ben Wharton Scholarship Fund. 6767 South Spruce St., Suite, 102 Centennial, CO 80112 (303) 563-8290 or follow the Donate Buttons to give in the "Memory of a Person" http://adamscamp.org You will use the email wharton@rkymtnhi.com. OR to the wonderful support group the family is actively involved in: Supporting Families with Koolen de Vries Syndrome PO Box 946, Brownsburg, IN 46112 or online at http://www.supportingkdvs.com/donations


The Family of Ben Wharton thanks you dearly.

To order memorial trees or send flowers to the family in memory of Benjamin Wharton, please visit our flower store.