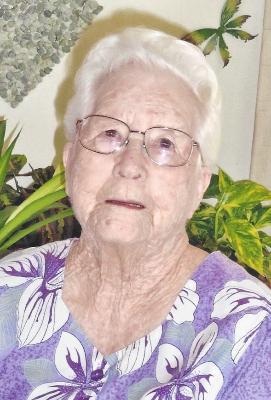 Annie was born January 11, 1927 in Palisade NE. To David Edward Babcock and Grace Zubie (Heinlen) Babcock. She spent her childhood in Phippsburg, Co. She was very proud to have graduated from 8th grade in Phippsburg. She met the love of her life there in school. She married Duane Austin Hulvey on June 20, 1944 in Denver, CO. They were married for 62 years. To this union 5 children were born. She lived in Deerfield Kansas, Phippsburg, Yampa, Denver, Clifton, Eckert, Delta and Kremmling, CO.

She enjoyed being around her family visiting, fishing, hiking and playing cards. Her hobbies were crocheting for family, growing her plants and flowers, doing puzzles, reading, and collecting rocks from her many travels.


A private Memorial Service will be held Saturday June 13, at 10AM at Church Of Christ, Kremmling, CO.

To order memorial trees or send flowers to the family in memory of Annie Lou Hulvey, please visit our flower store.